Before The Beatles and the Beach Boys played Red Rocks, another kind of ‘rock concert’ took place. For more than 300 million years, the foothills of Colorado were molded and shaped by geologic uplifts, the rise and fall of ancient inland seas, and the emergence of the Golden fault, which stretches along the Front Range for 24 miles (don’t worry – it hasn’t moved in 600,000 years). These forces left the megaliths that cradle today’s amphitheatre.

The geology of Red Rocks Park continues to fascinate both casual fans and geologists. For scientists every layer of rock is a page of geologic history, starting with the Pennsylvanian Period about 300 million years ago. At that time Colorado was not landlocked as it is today, but rather a landmass surrounded by ancient seas. Those seas, rising and falling over millions of years, left sandy beaches that became sandstone formations. Other rock, characterized by a conglomerate of various sized stones, is sedimentary material washed out of the ancestral Rocky Mountains. This range rose out of the inland sea about 300 million years ago. Rivers and glaciers immediately began washing the range away, a process that lasted millions of years. The eroding rock and other material built up the foothills and high plains on the eastern base of the current Rocky Mountains.

The geologic story of Red Rocks is highlighted near the entrance to the top of the amphitheatre where a bronze plaque marks a contact between the 1.7 billion-year-old Pre-Cambrian basement rock and the newer Fountain Formation born 300 million years ago. The Fountain Formation is sedimentary rock eroded from the ancestral Rockies and deposited in large alluvial fans. This ancestral range, a predecessor of today’s mountains, paralleled today’s Front Range, the chain of mountains just west of Denver centered on Mt. Evans and Longs and Pikes Peaks.

The first range, however, stood about thirty or forty miles further west. This first set of Rockies eroded away before the current Rockies arose approximately 65 million years ago. They formed a base for the second, present Rocky Mountains. The most notable remnants of the ancestral Rockies, a part of the Fountain Formation, are showcased in the Flatirons west of Boulder, Red Rocks, Roxborough State Park south of Littleton and the Garden of the Gods west of Colorado Springs. These enormous rock gardens were built by water, wind and ice that wore down the ancestral range.

40 million years after they surfaced, the first Rockies were gone. Rivers carried their sediment eastward, creating first the Fountain Formation and later the Lyons, Morrison, Dakota and other, newer formations deposited atop the Fountain. The uplifting of the current Rockies turned the Fountain formation bed on its edge so water and wind could sculpt the modern Red Rocks.

Putting the ‘Red’ in Red Rocks

Poking around Red Rocks, rock hounds will find that the stone varies from one place to the next in color and texture. This interbedding of the Fountain sandstones and conglomerates creates scenic landscapes at Red Rocks. Because of the different grain sizes and varying hardness in the Fountain Formation, it erodes unevenly. This “differential erosion” creates crevices, pits and caves.

Fountain Formation stones vary in color from light gray to pale red to dark rust. Weathering decomposes the rock, releasing minerals such as iron, which oxidizes to give rock a reddish-pink color. During burial and compaction of the Fountain Formation, iron-rich groundwater percolated through the rock leaving behind great rust-colored swirls.

Also generally reddish in color is the Lyons sandstone, which was deposited later, in the Permian Period, on top of the Fountain Formation. This handsome Lyons sandstone became a favorite Colorado building stone showcased in many nineteenth-century houses, churches, businesses, and sidewalks. It is prominent in buildings of the University of Colorado’s Boulder Campus. The same stone was used in many places in the amphitheatre and park, including the retaining walls, planters and the Red Rocks Visitor Center.

Some of the rock formations in Red Rocks slope as much as 90 degrees, while others tilt backwards. The southern monolith, that bears resemblance to a ship, is named “Ship Rock.” On the opposite side of the amphitheater stands “Creation Rock.” Both monoliths are taller than Niagara Falls. Red Rocks Amphitheatre was once listed as among the Seven Wonders of the World. 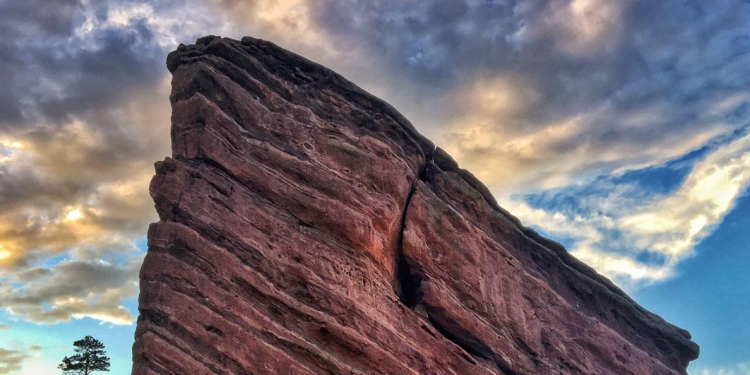